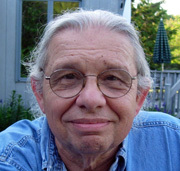 Randall Enos has been an icon in American illustration and cartooning for 56 years. Born “at a very early age” in the former whaling city of New Bedford, MA, he claims to “have always known what he’s wanted to be: an aging balding magazine illustrator.”  Basically self-taught, his work has appeared in virtually every major American magazine. “Except The New Yorker,” adds Randy. “It doesn’t matter, though, because everyone I talk to thinks I’ve worked for The New Yorker. And the same goes for the Society of Illustrators. Everybody seems to think I’ve won a medal at SI, but I never have.”


His comic strip “Chicken Gutz” held a lengthy major monthly presence during the Golden Age of the National Lampoon, and various television networks have commissioned his art for film animation. He and his wife, Leann, live in Easton, CT, where he is currently working on a yearlong project about the great white whale Mocha Dick, the real life prototype for Melville’s novel.

My most horrific art supply moment occurred in the early 60s, when I would take any job that came along. I got saddled with a project from McGraw-Hill that entailed, for some reason, putting down tons of Prestype lettering. I don't think there were even any drawings involved, just lettering. My wife watched me laying this stuff down for days -- swearing at each "broken" letter and trying to patch up the next with a pen while straightening out others by scratching them out and pressing down new letters. I had to stay awake for an amazing three days and nights (I was young and could do that then).

Finally by the fourth night with no end in sight, I succumbed to sleep. I blissfully snored through any trepidation about deadlines. When I awoke, panic struck, of course. I realized that it was all due that day and I had not even begun to have it finished. I slunk into my studio to view the looming disaster... and... (are you sitting down?) to my utter shock there was my job completely finished and neatly piled up ready to be delivered. My wife Leann, possessing artistic ability and a complete knowledge of what had to be done on the job, had stayed up all night and finished it for me. WHEW...I still get the willies thinking about it!

I hated using a compass with ink to make a circle because it would always blob on me right at the end. Speaking of "blobbing", I did a parody of Terry Gilliam’s animation style for the Lampoon, so I was forced to borrow a tool I was totally unfamiliar with: an AIRBRUSH! It was not a good one and every time I would try to get this smooth landscape going that went continuously for several pages behind my python, the airbrush would spit out a blob or splatter on the page. I would then paint a bush or tree to cover it. Needless to say my landscape was replete with forestry.

Pantone papers, of course. My life-blood. I printed all my linocut-collages on them. They were tough and beautifully colorful but unfortunately were rendered useless in this computer age because designers no longer need them to spec color for printers etc. They’ve even destroyed the machinery that made them. I fortunately still have a small stash and some at the art store, which I am slowly buying up. I also get some from widows of deceased artists. But mainly, I’ve been reduced to coloring my work with Photoshop Pantone Colors.

This is a hard one to answer, because I hardly ever throw anything away except my linoblocks when the job is finished (I know, I know, what's my address and when do they pick up the garbage...yeah yeah... forget about it). When I look into some of my cabinets, I'm shocked at some of the old stuff I find. Let's see, I've still got the electric eraser, the French curves, some Letraset, lettering guides, ruling pens, animation pegs, punched animation paper, AND I'm typing this on my OS 9.1 Rasterops computer. I'm blank...can't think of anything I've thrown out that I wish I had.

Well...it's not exactly an antique, but I have a Wacom tablet (probably the first one they ever made) which I have NEVER used...but it’s dutifully plugged into my computer. And I loved those adjustable, rubbery strips that you could form into any curve or shape that you needed to trace. Had one...NEVER ever used it.

There...those are my answers and I'm sticking by them come hell or high water... I'm pretty sure.